Based on the data collection results, the AFC TCP estimates a total of 34,804 fuel cell vehicles and 540 hydrogen refueling stations to be in operation as of the end of 2020. The total number of fuel cell vehicles is made up of 25,932 passenger cars, which saw a 37% increase in 2020. 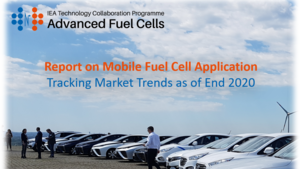 The number of fuel cell-powered vehicles being used for road transport is rapidly increasing around the world. In order to determine their present deployment status, the International Energy Agency (IEA) Advanced Fuel Cells Technology Collaboration Programme (AFC TCP) performs an annual data collection across its member countries and beyond. This report captures the current state of the country-based deployment of fuel cell vehicles globally as of the end of 2020. Furthermore, an overview of the worldwide hydrogen refueling station infrastructure is presented. Based on the most recent numbers and those from more recent years, the development trends are analyzed. Furthermore, information on selected passenger vehicles operating with fuel cell technology is updated and accompanied by an analysis of different incentives and vehicle prices in various countries. Apart from the number of hydrogen refueling stations, available information on the stations, such as pressure levels and links to their locations, are presented. Finally, the report reviews the defined targets, projections and visions regarding the future development perspectives of fuel cell vehicles and hydrogen refueling stations.

Having undergone a strong increase in a single year, South Korea now has the majority of passenger cars equipped with fuel cell technology on its roads. China still leads global markets for buses and medium-duty trucks. Moreover, the public refueling stations in Japan, Germany, China, and the U.S. represent a significant share of 63% of the total number of stations worldwide.

The full report can be downloaded here

The Technology Collaboration Programme on the Research, Development and Demonstration on Advanced Fuel Cells (Advanced Fuel Cells Technology Collaboration Programme, AFC TCP) functions within a framework created by the International Energy Agency (IEA). The activities of the AFC TCP are coordinated by the IEA’s Working Party on Energy End-use Technologies (EUWP). Views, findings and publications of the AFC TCP do not necessarily represent the views or policies of the IEA Secretariat or of its individual member countries.